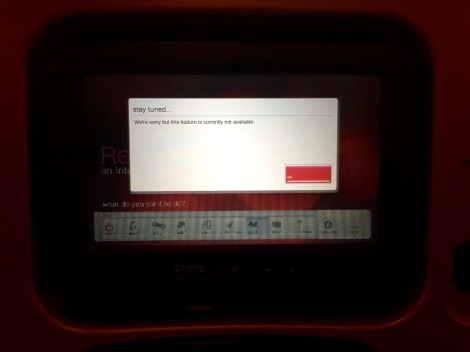 Virgin Australia is attacking my senses.

I have 13 hours on this flight. That’s 13 hours to kick back, relax and knock off six-or-so movies.

I sit down and immediately plug my headphones in and my ear drum kicks in. The audio booms, crackles, and then there is silence. I’ve never seen it and I’ve never been there, but I’m pretty sure this isn’t what “Everest” sounds like. I let the flight attendant know that my audio jack is jacked and in her perfect Australian accent, she tells me she’ll do everything she can to help fix the situation. It’s tough to stay mad at that accent.

The engineer side-steps his way onboard. Tells me there is something stuck inside the jack. Tells me there’s nothing he can do… in a perfect American accent. I can absolutely stay mad at that. Engineer Americana over here whips out a flashlight for good measure. Still nothing? That beam of light didn’t fix it?

Okay, I prepared for this. I’ll grab my iPad and keep my idle hands away from the devil. I sniff. The devil has other plans. Apparently, he has crawled into someone’s ass behind me, laid siege to their insides and released his fiery spawn from whence came in the form of a gaseous concoction of holy hell. I put my iPad down in lieu of holding my nose.

Dinner service commences. I order the beef and linguini. It arrives. I eat it. And angels sing on high. Just kidding. It’s airline food. Beef, linguini, vegetables, maybe tin foil? – every bite tastes exactly the same. But I eat every last bite – because what the hell else do I have to do?

Atrophy is slowly settling into my lap. With a mish-mash of trash on my tray table and nowhere to put it, the muscles in my leg start aching, pulsing, shooting.