Milan was surprisingly underwhelming. Truly, I was disappointed. For one of the high-fashion capitals of the world, I was expecting more glitz and glamour and couture. And I never found it. Maybe I didn’t look hard enough but I just wasn’t impressed with Milan. 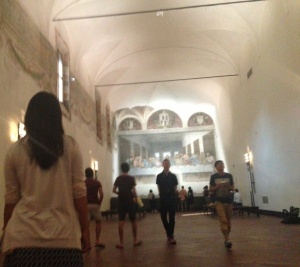 Our true intent for venturing to Milan was to see The Last Supper by Leonardo Da Vinci. Like true professional tourists, we bought our tickets about 3 months ahead of time. Thank goodness too. It would be impossible to get tickets to The Last Supper at the last minute; I haven’t heard of anyone who has been able to do it. Book ahead!

We had just a few hours to get settled before our appointment [yeah, we had an appointment. okay fine, a reservation] with The Last Supper. We headed to a small, unassuming convent and waited outside for a bit before heading to the ticket office.

Once we handed our tickets over, we waited in a narrow corridor. I Insta-Framed our pictures from Venice and Florence while Matt read up on The Last Supper.

At 405pm, we [and 10 others] were invited to follow a guide to another hallway. We all stepped through a set of glass doors into a glass room.

Ka-chhhsss. [I’m really bad at sound effects] We were all startled.  What was happening? We were sealed into a small room. We waited for 3 minutes.

Ka-chhhss. The front glass doors opened. We were allowed to shuffle into the next glass room.

Ka-chhhss. The doors we had just walked through closed behind us. Really? Is this for real? Everyone was quiet. Everyone except Matt and I while we giggled through our own Darth Vader impersonations and heavy breathing. Was this really necessary? What’s going on?! It felt like we were being decontaminated. We waited for about 5 minutes. Then we all turned as we saw two stragglers entering the previous glass room. Fashionably late. In Milan. Ironic. To me, anyway.

So we waited. Another 2 minutes. Gosh, the suspense was killing me!

Ka-chhhss. Finally! We entered the monastery. My word, I was in for a surprise! I really didn’t do any research on anything we were seeing in Italy. I thought The Last Supper was just a big framed painting. I was wrong. 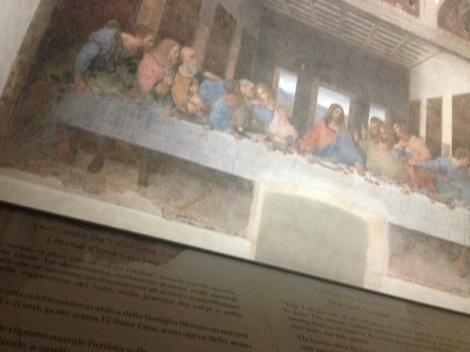 We walked into a long [dining] hall and when I looked to my left, I think my jaw dropped. The Last Supper was painted on the entire wall. IT WAS HUGE! I didn’t expect it. It was really neat. It’s such a shame that Leonardo painted this on a dry wall and not on wet fresco [like all the other amazing long-standing pieces of art around Italy]. Really, I can only imagine what this piece looked like when he first completed it.

When we first walked in, everyone sat down on the pews that were in front of the wall. We were all silent. As soon as you walked in, you could really sense how fragile this painting is. You wanted to breathe less in case you might blow a paint chip away.

After a minute of sitting, I was just itching to get closer. So Matt and I tip toed over to the railing to get a closer look. And pretty soon the rest of the group followed suit. We all admired the details and the facial expressions. The cracks in the painting made it more interesting. We all shifted from sitting to standing positions while we analyzed Leonardo’s work.

“NO PICTURES!” the security woman yelled.

Oh geez. Matt?! Matt had accepted the challenge of taking pictures of all the things we were instructed not to take pictures of. Mind you, I didn’t challenge him. Italy did.

I glanced around the room. A girl had just shoved something into her purse. How embarrassing. And as if getting yelled at in The Last Supper hallway wasn’t embarrassing enough, the woman had walked over to the girl and demanded to see her camera and that she delete the photos. The girl had to scroll through her pictures. She played innocent, “No, there’s nothing.”

It was enough to fool the security woman. Matt knew better. The girl took the pictures on her phone.

But then again, so was Matt.

Before we knew it, we were being ushered out. What?? It had only been 15 minutes. We only had fifteen minutes inside! Oh man. That wasn’t nearly enough time! Fifteen minutes. That’s all you get. I couldn’t believe it.