When I first met Lambros, he wouldn’t talk to me. He can be extremely shy in front of new people. But, like his mother said, he would be my best friend in 3 hours. I think it took us one. He’s very talkative; once he starts, he’ll interrogate you with thoughtful questions [beyond just your average “why?”]. He asks how things work and is very observant and aware of his surroundings. He’s incredibly smart [I told you he spoke three languages, right? he talks to his mother in German, his father in Greek, and English with me, all during one meal!] and what’s more, he’s so eager to share his knowledge, often ordering me to “Come!” and “Look!” at the world around him.

He’s cute, helpful, energetic, and very strong-willed. He can tell you the difference between a baby sunflower leaf and cucumber leaf. He can tell you how the crops faired last year and why some of them failed. When I was disappointed that I didn’t wrap grapes as fast as his mother, he reassures me that it’s because I’m not used to wrapping grapes, that one day I’ll be faster, and that today, it’s okay. He’ll also tell me another day that I’m washing water jugs much slower than his mother. [She was washing them outside with a hose and I had a sink! Come on! Jk :]

Anyway, here is his blog post. He would appreciate any comments that you have. I’ll read him your replies and you may or may not get a response :]

Ah. I also wanted to add that while we wrote this, he frequently stopped to think about what he wanted to talk about next. This is his thinking position: face down into the corner of the couch. Does he get any more adorable? Enjoy!

Lambros. I’m playing with the dogs a lot. We are putting bags around the grapes. Oranges are not ripe yet. Olives are not growing well this year. [later, when I repeat this, he will say he didn’t say this at all] The dogs bark a lot at night and they chase cats around. Figs are getting ripe. We have many ripe figs now. We have four dogs. Here is a picture of all the things I like [in order from left column down to right column down: watermelon [watermelon is his favorite, that’s why his arms are crossed], apple, tomato, potato, fig, and grape] 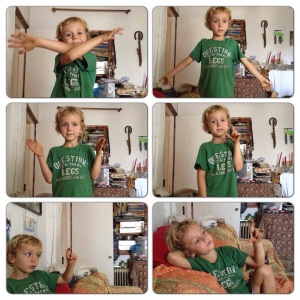 We have the fan on for writing the email to you.

This picture, we took in the middle of my email writing.

We put bags on the noshi pears and they are getting ripe and we picked already some. First they are green and then when they become ripe they are yellow. And there are some that have white spots. When they are ripe, they will have white spots, as white as this pillow.

Then we grow some tea that you maybe don’t know. We tried to grow ginger last year and we failed.

First we were an orange farm and now we don’t have so many because they died and we cut them down. Now we juice a lot of oranges and we have many fields of orange juice and peach juice. And we have champagne that I can’t drink but [Stephanie] likes it a lot.

We go frequently to the sea. And we go to the hotel. The people at the reception is Gregoris and he is the nephew of my father. When my mother is there, she puts jewelry in a box and she sells things. Then she goes to the postman and she brings the jewelry for the people. I say this maybe because you will want to also come here to volunteer.